The tragic loss of Robin Williams has stirred the discussion on suicide prevention. How do you catch it before it happens? I’ve read many suggestions this week, yet, for me there remains a lingering question: What if the person is really good at projecting their light?

I have lost 2 people close to me to suicide and one was in April of this year. She was a dear friend and my downstairs neighbor. I recently read that people who contemplate suicide will never outwardly discuss suicide if they are serious. So, you have to ask them the question “are you thinking about suicide”?

I didn’t know Robin Williams personally, but I remember seeing him being interviewed on Oprah years back. In the interview, he was funny, charismatic and was bouncing all over the place.   I remember looking at his face and asking myself “what is really going on with him?” There was a seemingly comical presentation, but there was something in his face and behind his smile, that I wondered if he was struggling with depression. It almost felt like he was projecting what he wanted us to see, yet I wondered who was really in there.

The same goes for my downstairs neighbor. She battled depression. If you were on the outside circle, you were welcomed by one of the brightest smiles you could have ever encountered. She was bubbly, social and had such a bright light, that you would never know there was something wrong. Yet, living above her, I saw the cigarettes in the morning increase, and the shaking in her hands when we would talk in passing. The drinking and socialite lifestyle shifted to drinking behind closed doors. I knew she was struggling. We talked about it, but the fact that she could shake it off, put make up on and look stunning every morning walking out the door to work, made it hard to believe that suicide would be on her mind.

Every soul comes into this life and has an impact on those around us. We do when we are alive and we do when we die.

How do you know when someone is projecting their light and hiding depression? Projection of self from a spiritual or intuitive perspective is when the light of the soul is not connected to the center of the body, and moves to the periphery of the energy field where it can maintain its glow.   A person may not intend to do that. Usually spiritual light moves to the periphery because there are core wounds in the center pillar of the body that push the soul’s light out. The ideal state is that the light of who we are is centered in our being. Living from that place would mean owning your true light and center, not living for others or according to expectations.
I imagine that is what those who eventually commit suicide were ultimately seeking- to find their light again. Life can be so big and overwhelming for many of us. Yet, when we are connected to our center, there is a deeper knowing of our true self and we make choices in life according to being in our center, versus, feeling out of ourselves.

I wanted more than anything for my neighbor and friend to see the light she exuded. I wanted for her to own it at her core, and live from that place of knowing her beauty and light. I wanted my musician friend who took his life on the Golden Gate Bridge to know the beautiful music he made and how many people’s lives he touched. 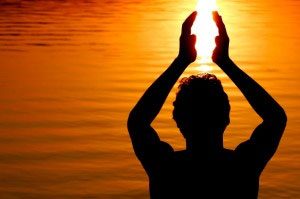 I wonder if Robin Williams felt his own light. Perhaps he did, but what I know in my own practice with clients is that when addiction and depression take over there is a different operating system in effect. The spirit has moved out of the center of a person’s being. You may see the light and the potential in them because the light has moved the periphery of the body. The self is projected out and you don’t see the wounds on the inside. Through intuition you may be able to sense something is off, but even then, the projection of someone’s light can feel infectious enough to miss the potential of suicide.

How does anyone who struggles with depression, addiction and contemplating suicide feel the light of their soul at the center of their being? Believe it or not, that is everyone’s work. That is the spiritual path. As we tend to our spirit, the journey to discovering our true self-unfolds. For all of us who are left impacted by the life and death of a loved one to suicide, it’s their gift to us to turn to the light within our own being and own our true center.

My prayer for Robin Williams and others who have passed on through suicide: May they be surrounded by love, and the purest love of God’s source. May the angels hold the little child within them and let that child be free of suffering. May they know the light that they are, and may peace be in the hearts and minds of all the loved ones mourning this loss. May we know the power of the human spirit. Amen.

4 Foundations of Intuitive Healing: How to Clear Energy Blocks & Turn Your Sensitivity Into a Healing Gift